Politics and My Real Life

I will go ahead and get it out of the way.  For those that know me, I know you are surprised that I have been silent on the matter.  That is strictly because I have been so damn busy.  Here goes–I am not sure why people even CONSIDER voting against their self-interest.  To say that I am continually dismayed by the state of civil discourse in this country would be an understatement.  If in my own family we so oppose each other’s opinions that the topic is off limits, I don’t have any hope for any change nationally.  So let me just give you some facts:

1.  I was married to a service member during the initial Iraq invasion.  While he is my ex and turned out to be a jerk, personally, I think it gives me some credibility to speak to the fact that the soldiers were lied to about their reason for entering that country and the result has been catastrophic for both our countries.

2.  Currently, I am married to a disabled Army Veteran.  His experience has been in the wonderful international destination that Afghanistan has become and later, Gitmo, Cuba.  I have held his had through PTSD episodes, nightmares, night sweats, tests, more tests, emergency visits, counseling appointments, frustrating goose chases that VA appointments can turn into.  I do think this gives me some credibility to speak on the subject.

3. President Obama signed a bill that allowed uninsured (like me) and those with pre-existing conditions coverage (my kids) and a number of other amazing things.  He also signed a bill that allowed me to become my husbands Primary Care Giver through a VA program.  This stipend allows me to facilitate every single thing necessary for him to get all the appointments, treatments, etc. that he needs without the fear of how to navigate a part time job and his critical care.  President Obama signed the Fair Pay Act and supports the right for me to make the decisions I need to for my own body.

Democrat or not, I can tell you that President Obama is the one that has done the most to directly impact my family.  Met with a crushing debt instead of what President Clinton left for President Bush, he has had a nearly insurmountable task.  He has begun a drawn down from two countries that we shouldn’t have occupied in the first place, trying to relocate prisoners in Gitmo that THEIR OWN COUNTRIES WILL NOT TAKE BACK, and some how try to help calm the fears in this country that our economy is permanently broken.

I wouldn’t want to be the President for all of the money and power in the world.  He was handed a Congress that lauded the fact that their job was to get rid of him and block his every move.  That should embarrass us all.  We can disagree but there are MANY things that could have been done to help us further along but simply because they were Democratic lead and sponsored, they were shut down.  It’s disgusting.

I support President Obama.  I hope you will too.

Smut and Those who write it

Whether you approve of Fifty Shades of Grey or not, there is no doubt that by now, you have probably heard of it.  I think that, overall, is a good thing.

We have such antiquated opinions in this country about sex and about the human body in general.  I grew up in Europe and seeing someone partially clothed in a shower gel commercial there was not uncommon.  No big deal.  Here, we get ridiculously excited over “wardrobe malfunctions” but also have a society that supports a Jersey Shore culture and new shows like Honey Boo Boo’s.  You can’t have it both ways America.  Stop telling people what kind of sex they can have, what they can read about it and what kind of person you are if you write it when you have shows like The Bachelor and The Bachelorette and send people on “private dates” where they can spend the night with each other.

I don’t get it.  So I keep writing.  This year for my Nanowrimo project will be an erotica novel under my own name.  Hopefully Fifty Shades gives me a little better chance of not getting hate mail and ostracized.  Or not.  Either way, I will keep writing.

My Year of Ups and Downs

Some of you know I had some serious stuff going on at the beginning of the year.  What went from a little test to a bigger test, to a procedure and then a bigger procedure nearly broke me.  As a Mom, the hardest thing in the world for me is the idea that I can’t take care of my family.  I try to let the older ones find their way and not intervene but having one still at home filled me with panic and anger.  It doesn’t make sense why things happen to people that try to do the right things and walk the path of good intentions.  I thought I was that kind of person so for me, anger often took over much of my days that weren’t filled with profound hurt and sadness.  It affects everything you do.

The result was this:  after a particularly horrific week in which I thought my husband was having a stroke and I had a huge problem resulting from the stress I was told I was having an emergency hysterectomy.  Although I have had all the kids I intended to, the finality of it was not lost on me.  I am not sure that is something anyone can really grasp unless it has happened to them either.  For the record, there is a lot of horrible crap on line about hysterectomies.  (Health situations are generally not the best subjects to Google, for sure.)  I have to give a shout out to Hyster Sisters, a great site/forum where you can get real information about what is happening and join a group of people going through the same crap.  I found it to be the What to Expect When Expecting of surgical procedures.  It answered questions I desperately needed and calmed me the hell down.

I am nearly six months post surgery now.  I feel SOOOOO much better.  You don’t realize sometimes how something that makes you sick can affect all parts of your body and mind.  Do I feel I deserved to go through what I did?  No and I am still damn angry about it sometimes.  Am I better off now?  OH YEAH.  Full speed ahead! 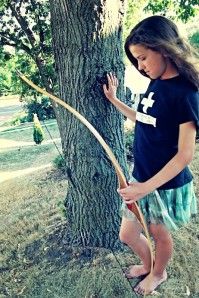 Thankfully, I healed quickly because my year literally went nuts shortly there after.  Most of you know Little Monkey has been competing in archery competitions but mid-year, she decided to take it to a whole new level.  Rather than me writing about her, I suggested she use her journaling she does during archery class as a prompt to chronicle her experiences.  Monkey has met some amazing people and formed friendships with international archers as well.  She has set some lofty goals, started writing blog posts and will only be busier next year.  For now I am handling her linking and photo uploads but she is learning and loving it.  If you are interesting in following her journey, she has her own site, Tumblr and Twitter.  While I have a Pinterest where she hosts “Little Monkey’s Board” it is largely nail polish and crafty related so be forewarned!

So I migrated to WordPress because iPage became so restrictive!  I am happy that I could pull in the posts from my old Blogger page but sad that I lost my iPage content.  WordPress gives me some cool features and I can post multiple links and pictures that I needed so YEAH!  Thanks for sticking with me through the changes.

I am still writing at Almost Nerdy, hanging out on G+ and Twitter as well as handling a Tumblr page of my own, one for grad school and one for our newest pet/internet star.  I am on month 4 of a 12-month Masters program with Fullsail University for a Masters in Education Media and Design Technology and getting to try out some new emerging technology.  My research blog I have to maintain for that program is here and my emerging technology reviews I had to do are here in the event that you are interested in either.

Tons of DIY projects are ongoing right now so you will see that stuff posted soon!