Zombies are awesome. Seriously. As a self described movie nerd, I could name a ton of movie creatures that I love to watch but it’s hard to beat the classic Zombie movie. For a long time, I regarded 28 Days and 28 Days Later among my favorite “newer” Zombiesque fun fests but the times, they are a changing. Aside from the blood and guts glory, especially in the grocery store scene, few things top Woody Harrelson’s SnoBall fueled freak out in Zombieland. Little Monkey liked it so much that she gave a copy of the movie, with an accompanying Twinkie, to Kevin for Father’s Day. Funny stuff.

Recently, Zombieness reached an all new level of greatness: 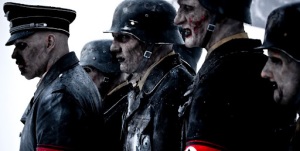 FOREIGN LANGUAGE ZOMBIE MOVIE. When we first heard about Dead Snow, it wasn’t even out yet. When the DVD was released, I could hardly contain myself, Zombie Nazis in the snow? Are you freakin’ kidding me? I was not disappointed. The ways to illustrate disembowelment reach epic proportions in this feature. I highly recommend it.

Now Brad Pitt is going to give the Zombie genre a turn. What is the Apocalypse coming to? I for one am stoked, and ready with my popcorn.